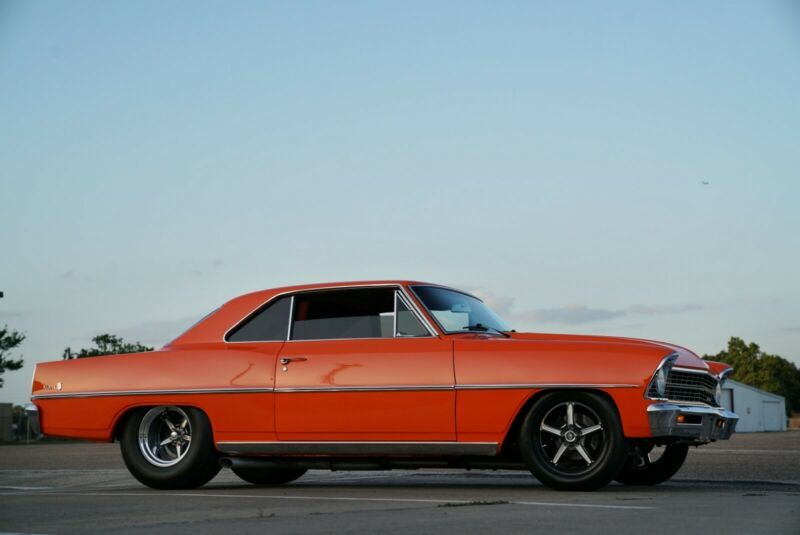 MASSIVE 540 CI BIG BLOCK CHEVY ENGINE BEARING CASTING #10051107 (THE ENGINE IS A MARK IV 4 BOLT MAIN BOWTIE BLOCK)
WITH FORGED INTERNALS AND CANFIELD ALUMINUM HEADS, AN EDELBROCK ALUMINUM INTAKE WITH A DEMON CARB, MSD PRO BILLET
ALUMINUM DISTRIBUTOR AND MSD 6AL BOX, ALONG WITH A NICE CAM THAT ISN'T TOO LUMPY THAT MAKES THIS CAR VERY EASY TO
DRIVE ON THE STREET. SHE RUNS NICE AND COOL WITH A 4 CORE GRIFFIN RADIATOR WITH AN ELECTRIC FAN THAT HAS AN
ADJUSTABLE THERMOSTAT.

THE BIG BLOCK CHEVY IS ADAPTED TO A STOUT 4 SPEED MANUAL TOPLOADER TRANSMISSION BY AN SFI BELLHOUSING WITH A
HYDRAULIC CLUTCH AND HURST SHIFTER THAT PUSHES THE POWER BACK TO THE 9" FORD REAR END WITH A POSI UNIT WITH 4:56
GEARS.

HEIDTS FRONT END INDEPENDENT FRONT SUSPENSION WITH RACK AND PINION STEERING ALONG WITH A BEAUTIFULLY ENGINEERED
FULLY BOXED AND TIED FRAME TIED TO A REAR END THAT CONSISTS OF A 4 LINK SUSPENSION SET UP WITH COIL OVER SHOCKS.
SHE TRACKS AND HANDLES BEAUTIFULLY GOING DOWN THE ROAD.

LINE LOCK IN CASE YOU FEEL THE NEED TO BURN SOME RUBBER!

BEAUTIFUL CHEVY HUGGER ORANGE PAINT. THE PAINT SHOWS BEAUTIFULLY WITH A GORGEOUS LUSTER! DARK TINTED WINDOWS AND A
COWL INDUCTION HOOD THAT GIVE HER THE STEALTH SLEEPER LOOK.

FULL 8 POINT ROLL CAGE THAT ALSO HAS BREAK AWAY BARS TO MAKE IT VERY EASY TO GET IN AND OUT OF. I AM 6' TALL AND
FIT COMFORTABLY IN THIS CAR.

HEADERS WITH DUAL 3" EXHAUST THAT GIVES THIS BEAST A NICE RUMBLE! SHE SOUNDS BEAUTIFUL!

AN EXTREMELY CLEAN AND SOLID MACHINE!

CLEAN TRUNK COMPARTMENT THAT WAS TASTEFULLY DONE IN TWEED TO MATCH THE INTERIOR.