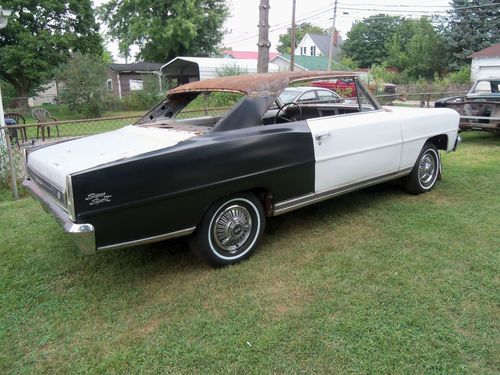 Condition: UsedA vehicle is considered used if it has been registered and issued a title. Used vehicles have had at least one previous owner. The condition of the exterior, interior and engine can vary depending on the vehicle's history. See the seller's listing for full details and description of any imperfections.Seller Notes:"Very nice builder. Good father son project"

Look at pic`s . Up for auction is a 66 nova real super sport. Real solid body.  No motor or trans. New tires. Car needs a full resteration. Car has NOS front fenders, rust free. New full quarters. New full floor pans. All already installed. Have all good seats, and have rear side glass and trim.   No front or rear glass. What rust you see is surface rust. Car is straight .Have all dash parts. Have CLEAR PAPER WORK. AS LONG AS RESERVE IS NOT MET, I RESERVE RIGHT TO STOP ACTION AT ANYTIME DUE TO LOCAL AVERTISING.  REMINDER TO ASK QUESTIONS or give me a call at 1-812-521-3245 for serious questions.    Rick   The last 3 pic`s were not intended to be in action.  I have 3 of these cars and one must go .  A $500 none refunable deposit due in 24 hours.   Buyer responseable for shipping.