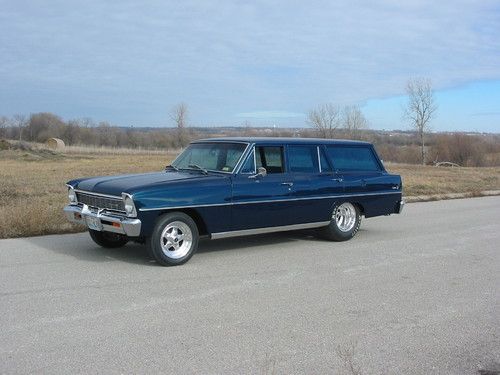 1966 Nova Wagon that i have owned for many years and has seen many different looks.

This has been a 3 year project with the help of 2 great friends that are mechanical genius and master auto painter.
The nova was original brownish gold, then went to a white and then decided this car needed a ground up since Wagons have become so popular. Decided to paint it 2005 Chevrolet SSR Aqua Blur, a beautiful blue that changes color in the sun...a translucent paint.
Everything on this car is either new or rebuilt..no short cuts taken. Car was taken down to a shell and was painted as if it came from the factory this color...interior and dash also.
Nova has power steering, power disc brakes, FACTORY AIR and power windows.
The list could go on and on, just some of the nice details about the car.
I do have most receipts for the build and lots of pics.
The body is laser straight and of course no dents or dings....perfect alignment of body panels and all doors open and close as they should...Paint is a 91/2 +..would give a 10 but have found 2 imperfections..small but there. Very fine small scratch on tailgate, very hard to see..easy fix and one spot on the fender, very small and you have to look to find it. I am very anal about my cars so i might be a tad picky.
The motor was custom built, it is all forged, alum heads and used nothing but the best in building this motor.
This car has custom made tinted side and tailgate glass that matches the color of the car. It is legal in all states and has the sticker in the corner of all glass. It is real glass not a tint job with film. I do have the original glass that comes with the car.
Hard to describe what all has been done to the car, but i used nothing but new parts and if you ever did a ground up you know what i mean and what is cost to build a car. I hate to admit but with the cost of the car included i have over 55k invested and there are always more things i could do but had to stop..lol
I am a retired truck driver and cars are my passion, car was built to drive and have fun at local car shows. Car has never been abused, never raced and my wife will tell you they get better attention than her..lol
I will look at trades but you pay the cost both ways.  62-65 nova, 48 anglia , late 50's Cadillac, ssr or corvair spyder.
If you have questions feel free to write, i have left tons of stuff out. If your looking for a clean ,straight Nova that will perform with the best of them and want a great show car or just for cruzin this is her.
Full payment expected with in 7 days of auction close, $2000.00 with in 24 hrs of auction end by pay pal.
On Feb-09-13 at 19:17:34 PST, seller added the following information:

Forgot to add that it does come with a ton of extra parts, most all of the original parts i took off, original bumpers, extra hood, new stock radiator, new complete set of brake lines, all the original glass and tons of other stuff.

4900 1966 nova wagons were V8's...this was originally a true v8 wagon when new. This also is the deluxe just had more trim that the regular 6cyl wagon..Tailgate window crank has been removed, tailgate glass is powered also.