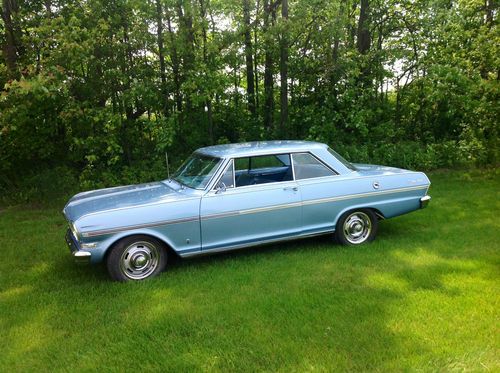 1963 Chevrolet Nova SS.  10 miles on a brand new rotisserie restoration by a professional shop. Well over 70k went into this restoration. As you might know, the SS was a 6 cylinder combo in 63. This is long gone and has been replaced by an 400-450 hp small block Chevy with ceramic coated headers and dual exhaust. The drivetrain is completely rebuilt from engine to rear axle. All chrome and stainless has been professionally re chromed or polished. Interior is professionally redone. This is a brand new restoration, no corners cut, satisfaction guaranteed. If I falsely represent the car when you inspect it upon pickup feel free to walk away, no strings attached. This is a California car, and wears all OEM original sheet metal. I have pictures after media blast to prove how clean car is. Please email me with any questions. Car is for sale locally so I reserve the right to remove the listing at anytime. Thanks.