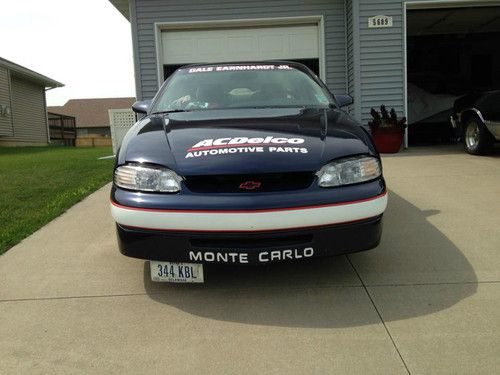 Condition: UsedA vehicle is considered used if it has been registered and issued a title. Used vehicles have had at least one previous owner. The condition of the exterior, interior and engine can vary depending on the vehicle's history. See the seller's listing for full details and description of any imperfections.Seller Notes:"Got some road rash on the front air dam as this car was driven on a few highway trips out to open houses at Dale Earnhardt Chevrolet. Also a couple dings from living in the garage with a car cover over her, needs a little paintless dent repair is all."

This is a one owner Championship Series Z-34 bought from Dale Earnhardt Chevrolet [one of one] Dale had this car made to commemorate Jr.'s championship in 1998 and is the only commemorative car built at the dealership for Jr. Both Dale and Dale Jr. signed the airbag on the passenger side, how many cars out there with that on the dash? Clearly a piece of history here. The salesman told me the design of the car was done by Sam Bass but I don't know that for sure. Everything on this car is original except the battery, everything else is as it rolled off the showroom floor where it was parked next to the Superman car jr drove at Charlotte in 1999. This car draws a lot of attention when I have gotten it out to stir the fluids up witch is about once a year.