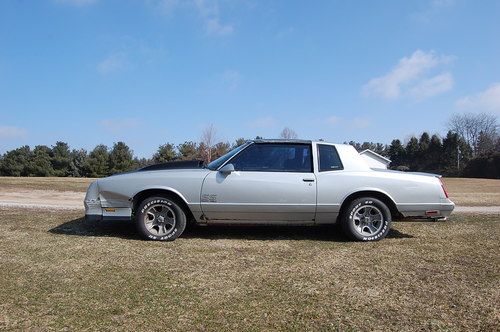 Condition: UsedA vehicle is considered used if it has been registered and issued a title. Used vehicles have had at least one previous owner. The condition of the exterior, interior and engine can vary depending on the vehicle's history. See the seller's listing for full details and description of any imperfections.Seller Notes:"This is a 1988 SS Monte Carlo with a 4 bolt Main Block. It runs and drives. The oil pressure gauge reads low pressure. Not sure if the pressure gauge is working correctly or not. It has a silver exterior and a burgundy interior. The exterior has a some rust, dings and dents as shown in the pictures. The interior needs some TLC. It has T-tops and auto locks along with a cassette player. The motor came from a 1984 1 ton truck. The title says the mileage is exempt. I do not know how many miles are on it."

This is a 1988 SS Monte Carlo with a 4 bolt Main Block. It runs and drives. The oil pressure gauge reads low pressure. Not sure if the pressure gauge is working correctly or not. It has a silver exterior and a burgundy interior. The exterior has a some rust, dings and dents as shown in the pictures. The interior needs some TLC. It has T-tops and auto locks along with a cassette player. The motor came from a 1984 1 ton truck. The title says the mileage is exempt. I do not know how many miles are on it. I am selling this for a friend. If you have any questions or concerns please feel free to message me and I will answer any questions that I can. Vehicle has to be Picked up only. No shipping is offered.