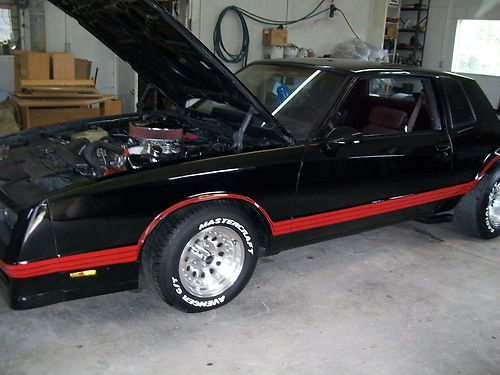 Your looking at a 88 monte carlo with American racing wheels,8"on front and 10" 0n rear all are brand new.Car has new paint with the stripes underneath the clear.Car has new headliner and new carpet with a jensen am fm cd player. has a cowl hood,rear quarter panels have been opened up for 10" wheels by professional with little or no change in appearence.Running gear is ole school 70 model LS7,12 to 1 motor,604 cam all forged bottom end,open chamber heads victor jr intake.Has 950 holley ouble pump carburator ,hooker 2" tuned headers,quick starter..Everything from battery to rear end is new,Motor is all factory GM and has less than 5 miles on it.Transmission turbo 350 with master TCI rebuild kit.Stall convertor is 3500 rpm,pipes are 2 1/2 in flow master mufflers,Rear end is 12 bolt mane GM with 343 rear solid positive traction...One bad hot rod rated over 600 hp...For more information you can call 304-467-78857-or304-887-8159 ask for Terry