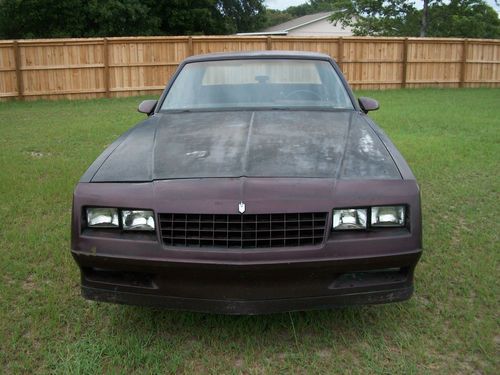 WHAT I HAVE HERE IS A VERY NICE SS MONTE CARLO, I  HAVE OVER $8,000.    IN THIS CAR,,, , ALL OF THIS HAS BIN DONE  TO THIS CAR IN THE LAST 200 MILES , COMPLETY REBUILT 350 ENGINE,WITH A MILD CAM, ALL BEARING, RINGS, HEADS, GASKETS, COMPLETY REBUILT 200R4 TRANS WIT A MILD SHIFT KIT, NEW !!!FRONT ROTORS,PADS,FRONT BRAKE HOSES, CALIPERS,MASTER CLY, RAD,GAS TANK,SEDING UNIT, STARTER, 650 EDELBROOK CARB,VALVE COVERTS,FAN BELTS,WATER PUMP, FUEL PUMP,4 NEW GOODYEAR TIRES. I AM GOING FROM FL TO PA, I CAN DELIVER THIS CAR ON THE WAY UP TO PA, CAR MUST BE PAID IN FULL FIRST. CALL FOR MORE DETAILS,  813 441 4192  THANKS TERRY