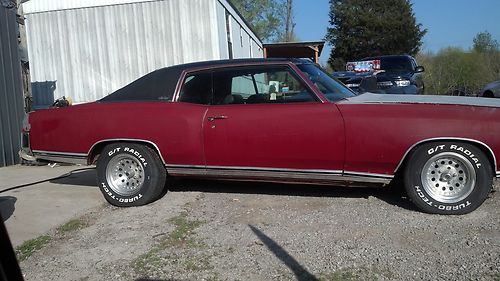 I HAVE FOR SALE A 1972 MONTE CARLO THAT NEEDS RESTORING. I TOOK THIS CAR IN ON A TRADE AND JUST DON'T NEED IT. THE BODY ON THIS CAR IS IN PRETTY GOOD SHAPE, IT WILL NEED A NEW ROOF SKIN, LEFT FENDER AND TRUNK PAN. THE DECK LID IS GOOD ON THE OUTSIDE, BUT WILL NEED REPAIR ON THE INNER STRUCTER, OR REPLACED. ALL OTHER BODY PANELS CAN BE REPAIRED IF NEEDED. ALL  OF THE PARTS ARE AVALIBLE TROUGH OPG. ALL THE GLASS IS GOOD ON THE CAR, ALL THE TRIM IS WITH THE CAR I HAVE BOTH TURN SIGNAL LENS FOR THE GRILLE AND BOTH H/L BEZELS. THE INTERIOR IS IN PRETTY GOOD SHAPE FRONT SEAT IS GOOD, HEADLINER IS GOOD BACK SEAT COVER IS GOOD JUST NEEDS TO BE REATTACHED THE THE FRAME REAR SIDE PANELS ARE GOOD, FRONT DOOR PANELS NEED NEW CARPET AT THE BOTTOM, THE  CARPET NEEDS TO BE REPLACED. THE DASH PAD HAS SOME CRACKS. THE CAR HAS A GOOD RUNNING 350 ENGINE, WITH ALL OF THE ORINGINAL A/C COMPONETS IN TACT, (NOT WORKING) BUT THERE. THE TIRES ARE JUST ROLLERS. I HAVE DROVE THIS CAR UP THE ROAD AND IT RIDES AND DRIVES GOOD, IT WILL NEED SOME MINOR BRAKE WORK. THIS WOULD BE A GREAT START ON A RESTORATION. THERE IS NO FRONT BUMPER BUT I HAVE ALL OF THE BRACKETS.  I HAVE DESCRIBED THIS CAR TO THE BEST OF MY KNOWLEDGE, THERE IS NO WARRANTY WHAT YOU SEE IS WHAT YOU GET. I WILL NOT SHIP, BUYER IS RESPONSIBLE FOR ALL SHIPPING IF NEED BE. $300.00 PAYPAL DEPOSIT DUE AT THE END OF THE AUCTION, NON REFUNDABLE, WITH THE REMAINDER DUE IN CASH UPON PICK UP OF THE CAR THANKS. CAR MUST BE PICKED UP WITHIN 14 DAYS OF CLOSE OF AUCTION.