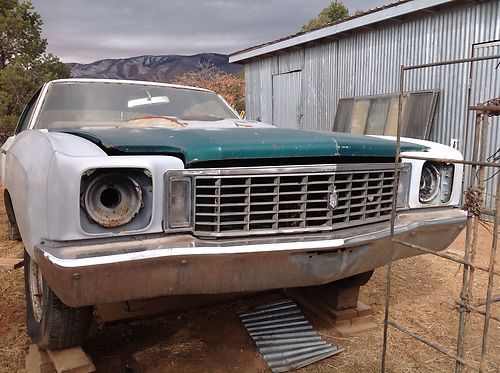 Condition: UsedA vehicle is considered used if it has been registered and issued a title. Used vehicles have had at least one previous owner. The condition of the exterior, interior and engine can vary depending on the vehicle's history. See the seller's listing for full details and description of any imperfections.Seller Notes:"Started working on this car,but I am in the process of moving and need it gone. Put in a 454 that runs great,the driveshaft isn't put in so car will have to be towed. If someone wants a project car for his son or daughter or first car this will make a nice car. Or if even for a parts car,I have lots of stuff to go with it. Chrome,new trunk and door locks to much to list."

Has the normal rust spots,some repair to the floor and trunk needed. Also fenders could use some work,have most of the interior and will need a head liner. Original radio,bench seat ect. The car is listed locally and i have the right to end auction early. $500 deposit due in 24 hours and car must be picked up before the 14th. Will not ship or deliver and at pickup only cash. Thank you and happy bidding.This is a no reserve auction.