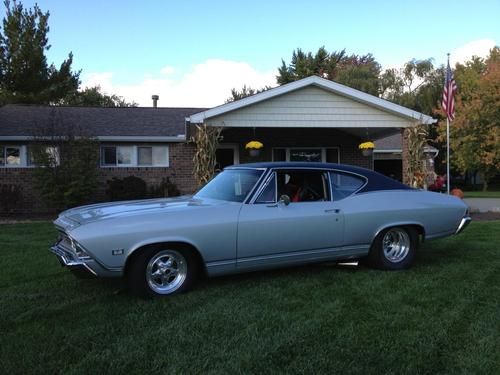 Condition: UsedA vehicle is considered used if it has been registered and issued a title. Used vehicles have had at least one previous owner. The condition of the exterior, interior and engine can vary depending on the vehicle's history. See the seller's listing for full details and description of any imperfections.Seller Notes:"454-4 speed, Posi rear end. 1000 miles on complete restoration. S&W 1/2 rear chassis. To many toys! Must Go! Delivery available call for pricing. For sale locally"

year old restoration on a 68 Chevelle/Malibu.  with a big block 454 backed by a 4 speed transmission a S&W rear 1/2 chassis was added, wheel wells tubbed, slicks added.  Race seats 5 point harness and roll cage.  Car can be delivered arrangements prior to sell for a separate fee.