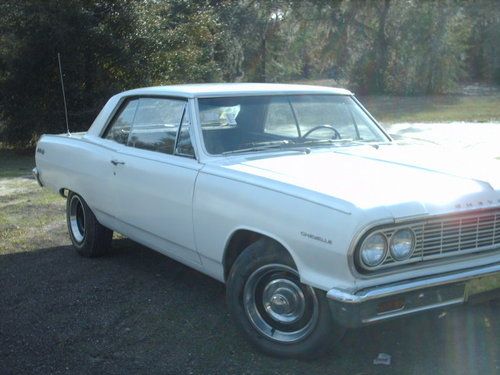 up for auction -- 1964 ss chevelle malibu -- 454--2 speed powerglide automatic--p/s,pd brakes,10 bolt posi-traction.all new interior except bucket seats and rear seats, they are used--  new headliner is not completely installed--new driver side floor pan and front passenger side pan-- new trunk pan and braces--new windshield--new rubbers on doors ,roof channel,trunk.--needs window felts,driver side fender chrome and center trunk chrome--the chrome is bolted on but not all the clips are there.-- it also  needs rear windshield chrome,-- there is  bondo on bottom of fenders ,doors,and quarters. --i do have an extra p/s quarter skin to go with the car.--if you have any question call 352-542-7334-- please-- dont bid unless  you are  sure ,--thanks in advance and god bless