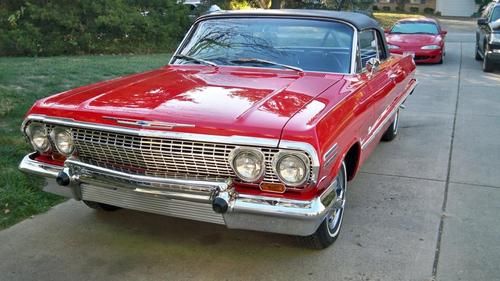 You are looking at a 1963 Chevy Impala Convertible I am listing for a friend of the family.

The car had a complete frame off restoration. Restoration began around 1994 and ended around 2002. Since then the car has been driven less than 500 miles.

The quality of the restoration in very good, completed by a builder that has was in the great 8 for the Ridler award in Detroit Michigan, 2012.

I encourage you to call me, Dwaine at 937-430-6004 for more information and to set up an apointment to see this beutiful car.

If you wish to bid on the car you must call me to discuss. This is an expensive item, If you do not call I will assume you are a fraud and cancel your bid. No Trades, No Delivery, Cash Only.