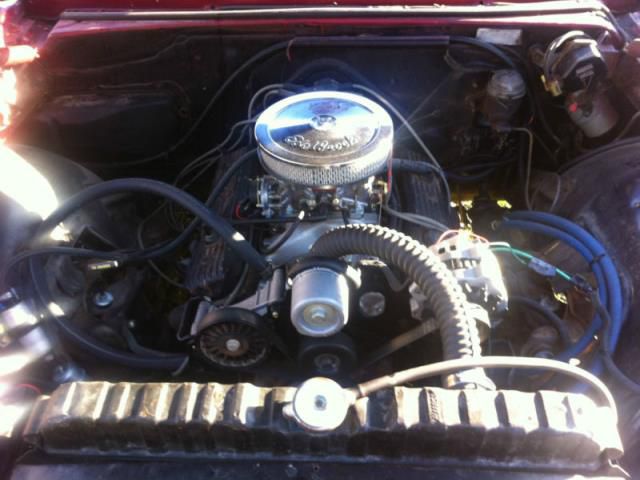 1966 Chevy Impala, 2-door 350 ci engine with TH350 transmission Headers with dual exhaust and crossover New upper and lower ball joints New shocks and springs front and back New 15 inch Alloy wheels and tires New front valance in box. Power Steering / Tilt Wheel The car was sitting under a carport in Wyoming for 15 years when I got it. With it being dry in Wyoming it's not a rust bucket. I had the 283 running but broke a head bolt trying to change the heads so I could run unleaded gas. I found a 1995, 350 and dropped it in there intending to take it out. It runs so nice I'm not sure if I want to. The 350 was rebuilt 40,000 miles ago and the guy took it out to put in a bigger motor. It's a 4 bolt main bored 40 over, I have all 1988 accessories on it because the 95 motor was all computer controlled. It has an HEI ignition with a new 4 barrel carburetor, electric coke, electric fan, 100 amp alt, headers, and dual exhaust with glass packs to the rear. It runs great and is quiet inside the cab, rumbles out the back.