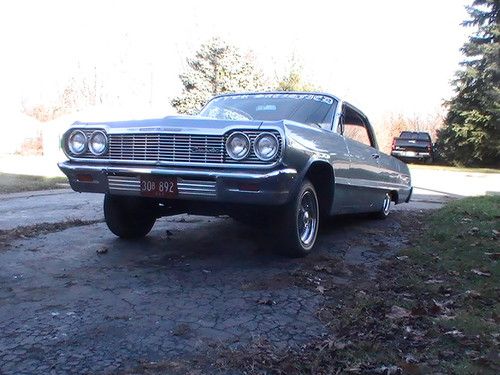 My loss your gain.  This car has been verry well taken care of, garage kept and never drivin or left in the rain, not smoked in, and always waxed.  has 10 switch hydralics. 100 spoke tru knock off 14x7 rims.          i parked it in my garage 5 years ago to chrome plate parts and bad health struck and i havent been able to plate parts in my shop or work on it. it has sat in garage for 5 years and has not been started. some original parts have been chrome plated and others havent. the plan was to plate every thing under the hood. The inside looks great and outside looks great too. side trime and mirrors have been shaved to show off that wonderfull body. add some new batteries to get those pumps going lightning fast and by spring you could be hittin the switches on one sweet 64. depending on where you live you could be hittin corners on 3 wheels right now and rolling thew town showing every one who the man is.  dont be like me and watch this lowrider roll away forever.    10 switch hydraulics include  front,back,side to side,corner to corner font & back,3 wheel right & left, pancake and sawtooth. takes 4 deep cycles batteries,can use 2 to work to system if you want them slower. comes with 2 deep cycles(from my boat) and a free new charger(with alt and battery test and jumpstart) to keep ya going till you get a deep cycle charger to properly charge deepcycles for full power and lightning fast hydraulics. you can contact me to for info and photos of the under the car & exhast, all rust free. i havent started car in years. i cant stand to see this buetifull car sitting imprisoned in my garage untouched.  SOLD AS IS. Buyer resposible for pick up and delevery of car after payment. i am paypall verified. A quick google search and you can get quotes to see the cost of having this 64 impala shipped to you.