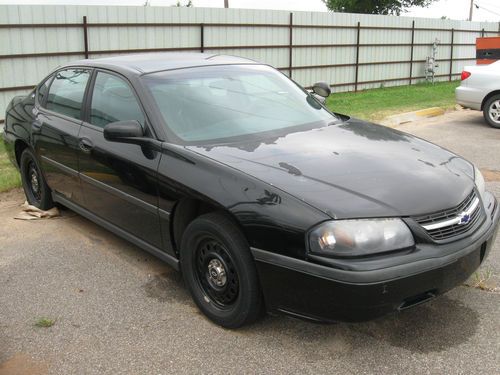 Condition: UsedA vehicle is considered used if it has been registered and issued a title. Used vehicles have had at least one previous owner. The condition of the exterior, interior and engine can vary depending on the vehicle's history. See the seller's listing for full details and description of any imperfections.Seller Notes:"Needs transmission repair, engine starts but has oil leak. Hail damage."

The City of The Village, Oklahoma is selling a surplus 2002 Chevrolet Impala police car.  The vehicle was purchased new from the manufacturer and is equipped with a factory police package.  It was driven as a marked police unit as well as unmarked and has not been used in the past 18 months.  The engine starts but an oil leak produces smoke when first started.  The transmission slips and is in need of repair or replacement, all window glass is intact and there is noticeable hail damage on the body along with other minor scratches and dents.  No attempt has been made or will be made to determine the condition of any mechanical part of this vehicle.  The vehicle is driveable but does not have a license tag.  More pictures are available upon request and on site inspection is available by appointment.  Balance of sale price must be made by cash or cashiers check when vehicle is picked up.