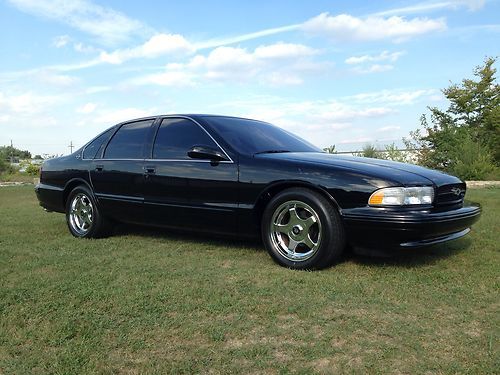 Car has been stored indoors with battery tender and car cover

Driven Every Couple of Months

Always had Sta-Bil Fuel Stabilizer in it

5% Tint on side and back window

Other than exhaust, all stock

Still have complete stock exhaust if wanted at no charge

Car does have original tires on it, they show no sign of dry rot or wear had tech look at them at oil change

This is a 3 owner car, original buyer, my father, and me. My father and I have owned 150+ Cars, Trucks, Harleys, Boats, Street Rods, and Muscle Cars over the years. This is a very clean original car that has been part of our collection. We are just getting down to a couple cars because they just sit in our storage building. It's time for someone else to start enjoying them. We recently sold a 1971 Chevy KingsWood Wagon with a Big Block with less than 50k Original Miles to GAS MONKEY GARAGE that will be on Fast n Loud this season. You won't be disappointed in the condition of this car if you come and look at it. I have been on alot of trips to see a so called clean vehicle and I wouldn't waste a buyers time like it has been done to me.