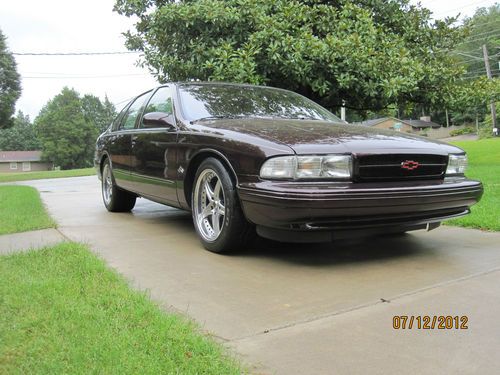 I have my 1996 DCM Impala for sale.  I am the second owner of this car and it is the most documented car I have ever owned.  I purchased the car about 1 year ago with the intentions of keeping the car for a very long time.  Since owning the car it has been in the garage with two covers on it, and has probably only had 4 tanks of fuel ran through it since then.  The entire car has been modified for the better.  The engine has been bored and stroked to 396 ci.  and has approx. 10,000 miles on it since being rebuilt.  The transmission is supposed to be rated at 1000 hp and has 2500 miles on it since purchase. The rear has 3.73 gears with everything being replaced in it also.  The doors have been rehung and close like a late model luxury car.  There is plush carpet in the car, over the factory carpet.  The seats have had extra padding put in them.  The car has adjustable Koni shocks all the way around.  It has an aluminum extended driveshaft.  The shock mounts on the rear have been changed to the correct geometry when the extended control arms were installed.  I have every receipt for everything that has been purchased for the car. The car made 487 hp at the wheels, and I can provide the dyno sheets if needed.  I have re-tinted the windows, put paint matched rear quarter logos on and removed the pinstripe since these photos were taken.  When I say every receipt has been kept for the car, I mean everything down to a single lug nut and air fresheners.  Please contact me at 256-759-2620, or via eBay message center for more information.

The car is listed locally also.  If it sales locally the auction will be ended early due to it not being available for sale any longer.