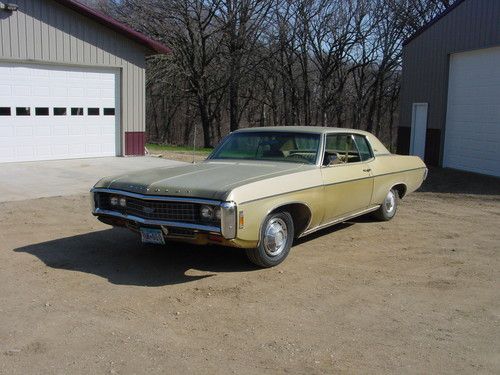 Up for bid is a 1969 Chevy Impala. This car has the original 327 engine with an automatic transmission. This is a nice running and driving car. It is believed that it has approximately 50,000 miles on it. I had the odometer wheel sent in to get fixed and it was fine for a while, but now the mileage is off again. It has the normal rust issues like lower rear quarters and behind front wheels. Rocker panels are solid. Very straight car and wouldn't be too hard to make into a fun street machine. Call or text with questions 218-731-6785. I have the original Protect-o-plate and window sticker. Interior has the normal wear and tear on the front seat but overall is in good original condition. Tires are good. The car is for sale locally also and I reserve the right to end the auction early. Keywords: 1969, Impala, 69, Chevrolet, 70, 68, Nova, Camaro, Chevelle.