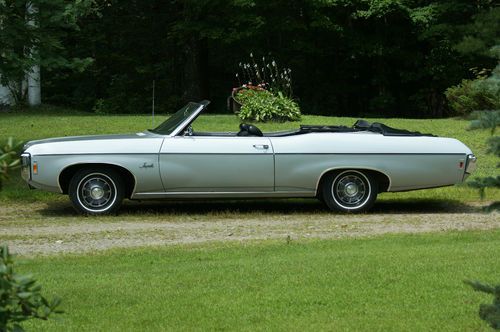 Condition: UsedA vehicle is considered used if it has been registered and issued a title. Used vehicles have had at least one previous owner. The condition of the exterior, interior and engine can vary depending on the vehicle's history. See the seller's listing for full details and description of any imperfections.Seller Notes:"right rear corner of top has hole from mice see pic"

Have up for auction a 1969 Chevrolet Impala Convertible Silver Met with 64092 miles. Car has black top and interior.  Seat covers are original  in good condition with no holes or tears, carpets original in good condition no holes.  Convertible boot is original like new, convertible top has been chewed on right rear corner about 3 inches long (see pics).  No accident damage vehicle is original except for normal maintainace parts, has 4 new tires, spare is original.  Car is garaged year round, was undercoated when new. Car has yearly inspection.  Car is 2nd owner with original papers.Buyer is responsible for pick up or delivery, payment required by cashiers or bank check within  7 days of auction close.  Am listing this vehicle for my father in law, please email any questions, if I cannot answer can get you in touch, car is 5 mins away.