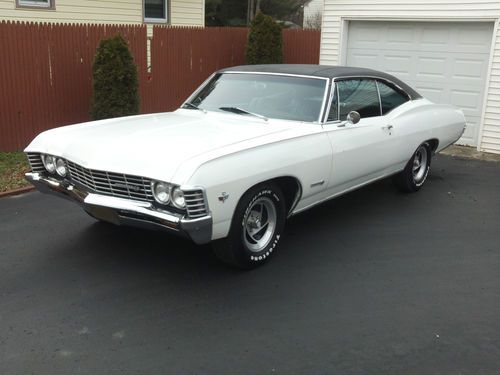 REAL SS IMPALA WITH A BUILD SHEET AND  PROTEC-O-PLATE!

CAR RUNS STRONG NOT FOR THE WEEK HARTED CRUISER

IT'S AGE IN SOME SPOTS BUT REAL MINOR! THE ROOF HAS RUST SPOTS UNDER THE VINYL

IT WILL NEED ATTENTION   NOTE PICS  THE FLOORS AND TRUNK

HAS HAD PATCH PANELS PUT IN LONG AGO

ALL THE CHROME IS VERY NICE STILL HAS THE ROCKER TRIM

BODY AND PAINT IS NICE ALL THE GAPS ARE NICE

SO ARE THE BUMPERS EVERY THING WORKS 100%

THE CAR IS A VERY NICE DRIVER YOU CAN RESTORE AS YOU DRIVE IT.

IT WILL GO ANY WERE!!!. EVERY THING WORKS ON THIS CAR.

A/C CAR BUT NO COMPRESSOR.

OR YOU CAN TAKE IT TO THE NEXT LEVEL WONT TAKE MUCH......

AS IS SALE THE CAR IS LIST LOCALLY I MAY END THE AUCTION EARLY.

THE BALANCE IS DUE 3 DAYS AFTER THE AUCTION ENDS.
THE BALANCE IS TO BE MADE BY BANK WIRE ONLY!
NO OTHER PAYMENT WILL BE ACCEPTED.


TO ALL BIDDERS WITH A FEEDBACK SCORE LOWER THEN 25.
YOU MUST CONFIRM BEFORE YOU BID ON MY CAR
OR YOU WILL BE BLOCKED FROM BIDDING!

YOU ARE WELCOME TO SEE THE CAR IN PERSON AT MY HOME
BEFORE YOU BID !!! NOT AFTER YOU WIN.
ALL NONE PAYER WILL BE REPORTED TO EBAY.


check out my other auctions