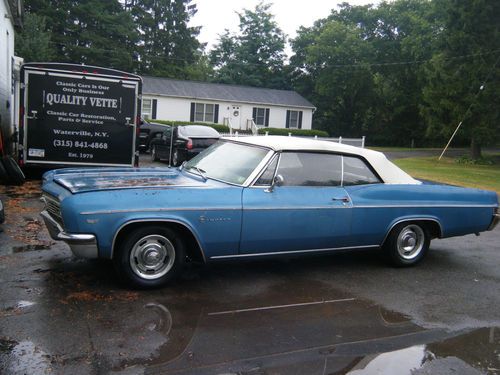 1966 CHEVY IMPALA CONVERTIBLE 283, POWERGLDE, NEW TIRES ON 7" RALLY WHEELS WITH CENTER CAPS AND RINGS. HAVE THE ORGINAL WHEELS AND WHEEL COVERS..IT WAS PAINTED MARINA BLUE AT SOME TIME. A WHILE AGO AS THE PAINT IS PEELING OFF. ORGINAL COLOR IS MAROON. HAS WHITE TOP. DECENT SHAPE. REAR WINDOW HAS TO BE INSTALLED. I HAVE THAT. ITS A GLASS WINDOW.TOP WORKS. IT HAS HAD PATCH PANELS INSTALLED ON THE QUARTERS. AND A NEW TRUNCK FLOOR  . THAT WAS INSTALLED A WHILE AGO. MAIN FLOORS HAS HOLES, I HAVE NEW FLOOR PANELS . THE FRAME WAS PLATED OF LEFT SIDE. TNE INTERIOR IS BLACK. FRONT SEAT NEEDS RECOVERING. BACK IS GOOD. THE ENGINE WAS REBUILT. YOU CAN SEE WHERE THEY DECKED THE BLOCK. SOME REASON THEY USED A 1963 BLOCK. INTAKE IS ORGINAL, DON'T KNOW ABOUT THE HEADS, I DIDN'T TAKE VAVLE COVERS OFF. RUNS AND DRIVES GREAT. , NEW FRONT BRAKES. JUST HAD IT INSPECTED, POWER STEERING AND BRAKES. YOU CAN DRIVE THE WAY IT IS OR RESTORE. . HAVE TOO MANY CARS. SOME HAVE TO GO.  ANY QUESTIONS E-MILA OR PH (315) 841-4868.