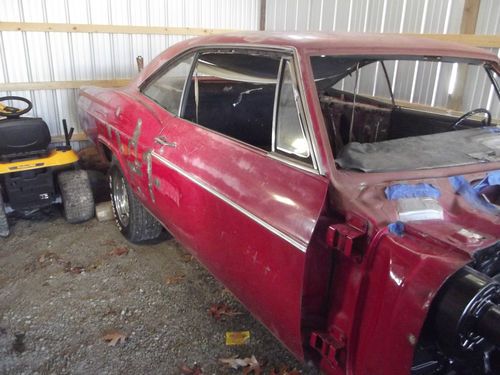 Up for bid is a 1966 Chevy Impala 2 door coupe. The Impala still has the original red paint and black interior. It still has the orginal 327 (275hp) motor with 2 speed powerglide transmission. Has all the original glass for the car. We put a new trunk pan in it aswell as a new lower quarter on the left side. The car is complete but we took it apart to restore it but have all the parts for it. Also with this sale will be another 1966 impala 2 door coupe that has a 396 big block and a 2 speed powerglide transmission in it with green interior. It is also a complete car that was going to be used for parts. The primer Impala does not have a title on it, but will give bill of sale for that car.  Thats why we was going to use it for a parts car. We can help with loading the cars if needed. The cars are also for sale locally. We can store the cars for 2 weeks after payment received, If that will help with getting the cars picked up from location.