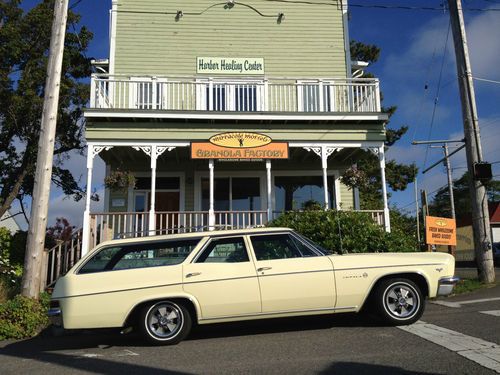 Condition: UsedA vehicle is considered used if it has been registered and issued a title. Used vehicles have had at least one previous owner. The condition of the exterior, interior and engine can vary depending on the vehicle's history. See the seller's listing for full details and description of any imperfections.Seller Notes:"20 yr old repaint with a few minor bubbles,scratches and chips. Very solid straight car with no major rust. Interior needs headliner,and door panels have a few marks on them."

Very clean 1966 impala wagon. 283 with a 200r4 auto. This is a very nice non restored car that has had one repaint. The car  is very solid. Items that have been replaced have been done with stock parts. The only upgrade is the 200r4 trans (instead of the power glide) which makes it drive very nice on hwy, and the radio is modern with a stock looking face.( No cut dash) The new stock parts include , windshield, carpet kit, dash pad, front seat cover, brakes, drums, tires, and misc tune up parts. The car runs and drives very nice, it has spent most of its life in AZ. The air conditioning even works and blows ice cold. Car has roof rack and dealer added compass and tissue dispenser. I have protecto plate , build sheet and manual for this car. I have owned a lot of nice cars, but I get more people giving me the thumbs up than any other car. Its very fun to drive, and chicks seem to dig it.is also for sale locally so I will pull add at any time if it sells.