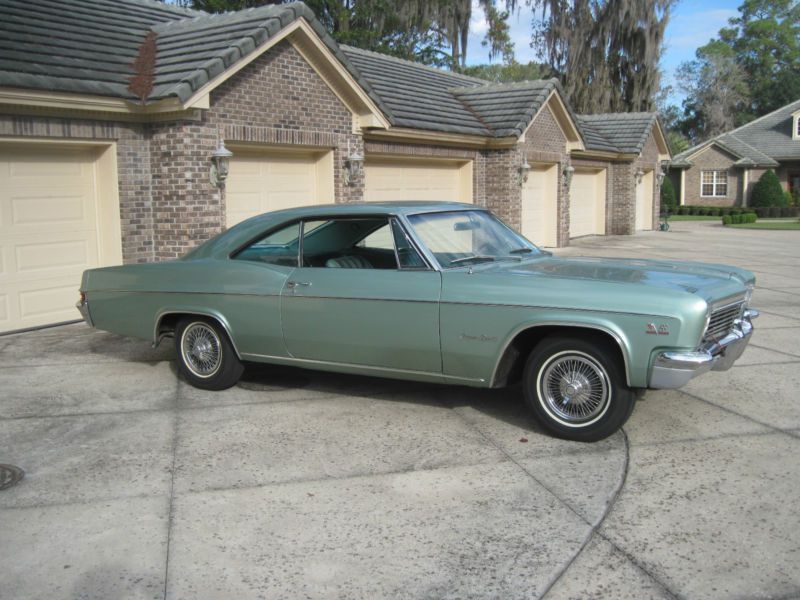 If you have any questions feel free to email: merissamaalhameed@ukpet.com .

1966 Impala Super Sport
427 ci/425 hp
This is the real deal! It's not a clone, tribute or wanna be. Assembled in Norwood, Ohio this car has all the parts
that it was born with. One of approximately 200 full size passenger cars with the rare engine and drive train
option. At 72 years old, I am reducing my collection and am willing to part with this Willow Green Super Sport
which I've owned for many years. The car is totally original with the exception of a quality repaint about 10 years
ago. Photos will reveal the original rally steering wheel with age cracks and one can view the nick on the front
left fender. I've driven this car many miles to both shows and tours. It does not overheat even on the hottest
Florida days. The mileage is original and it has been stored in climate controlled environment when not used. The
carpets are original as are the old style rubber floor mats. The engine compartment is correct from the air cleaner
to the exhaust manifolds with the thick core radiator, four bolt main block, mechanical lifters, factory aluminum
hi rise intake, 780 dual feed Holley, etc. The car's battery is a correct reproduction as are the biased belt,
optional but required, 8.25 X 14" tires. There are no known defects and I would drive the car across country! The
underside is all original with the correct exhaust exiting behind the rear tires and the factory hi-po sway bar is
correct for this engine option. I encourage all interested parties to view the car in person or have your
representative view it for you. This is not a 'trailer queen' but an all original, adult owned car, maintained to
be both driven and enjoyed. Don't look for aftermarket headers, HEI ignition, or loud exhaust exiting under the
rear bumper as it is fully factory correct! The factory options are listed on the reproduction window sticker. The
fixed mast antenna is unscrewed and inside the car as it hits my ceiling when the car resides on the lift. It is
correct for the RPO U69 AM-FM radio. The clock, on the dash is also correct. It was placed there when the dash
space was used by the factory tach. The clock part number is: 986473. Please, no low offers; the car is exactly
what you see! All body panels are original to the car and no rust is evident in any of the sheetmetal. If it
doesn't sell, it will be offered at the Daytona Turkey Rod run at the end of this month.