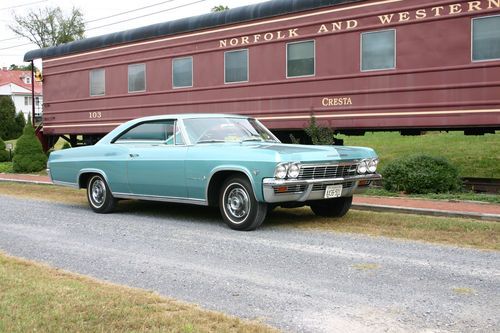 1965 Chevrolet Impala Sport Coupe - Only 17,000 actual documented miles! This time capsule was unearthed in 2013 from a spotless, dry garage and is much better than a corroded barn find! If you have been following the saga of the Lambrecht Chevrolet auction, you will have seen this car’s twin (a 396 non SS) sell for $72,500. The car offered here is in superior condition but with a small block. This is an investment grade vehicle.

Mr. Taylor was the original owner – he cherished and pampered this beautiful Artesian Turquoise car since the very first day of his ownership on August 26, 1965. It has been garage kept its entire life and has never been rained on. Mr. Taylor passed away in 1994 and the car was left undisturbed until his wife’s passing in 2013 when I purchased it from the couple’s two adult daughters. The car is completely original – nothing has been altered or changed except for “new” tires in 1973, reproduction battery & cables in 2013, and fresh brakes a few weeks ago. The original paint is exquisite and includes some touched up areas and rock chips. All original paperwork is included – the window sticker, bill of sale, maintenance book, protect-o-plate, and owner’s manual. All receipts from new are included as well as Virginia State inspection slips where the mileage was recorded every six months. The documentation is extensive and the paper trail unbroken. This car has a clear VA title marked “Actual” next to the mileage.

This car is equipped with a silky smooth and quiet 283 2-barrel and Powerglide transmission. You will note in the photos a very rare engine cable anchoring system installed by GM under a motor mount recall dated April 1972. The original invoice included dealer undercoating and the black on the engine is overspray. The seat covers were installed when new and have yellowed but the upholstery below is absolutely perfect and as new. The condition of this car is just astonishing from every angle.

A note about bidding: There is NO RESERVE once the first bid is placed. Your bids will be respected and protected - I will not sell this vehicle out from under you - I will hold it until the end of the auction. This car IS NOT advertised locally or anywhere else.