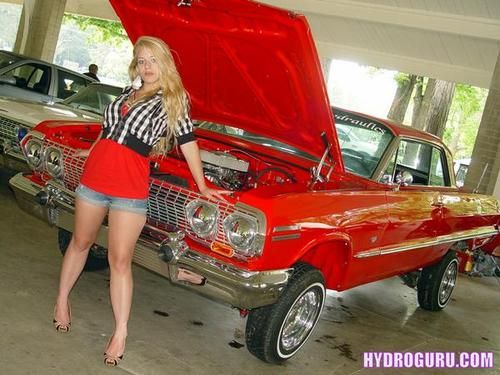 I purchased this car 7 years ago from a muscle car dealer in Tennessee. Decided to take it to the next level. 1963 SS Impala completely restored, new everything 5 years ago. It was put on a rotisserie, all undercoating was removed, windows were removed, it was taken completely apart, nothing was left untouched. All new wiring from painless wiring, no cut wires, plug & play. All the little things were replaced as well, window cranks, door locks, all rubber gaskets or otherwise, gas tank, sending unit...everything. Floors, doors, hood, trunk, bumpers, solid car-the list goes on. 3 pump chrome setup with all 1 inch fittings. Has 4 switches on the dash. Has accumulators on the rear for a smooth ride. Rack material is built out of 3/16. Battery rack was built to be easily removed without cutting or welding, it just unbolts. Has a redtop optima battery under the hood & has 8 odyssey 2150 batteries that cost $370 each in the trunk. These are dry cell agm batteries, they are sealed & there is nothing to leak out. Batteries have been connected with heavy gauge wire. Everything is reinforced, the frame from front to back including the body mounts, core support & battery tray. Has a Toyota 1 ton rearend all chrome-trailing arms, 3 link, brake calipers. Because of the 3 link the rear does not go to the left like a stock Impala, it stays center at any height & is narrow so you can run fender skirts & wide tires if you would like. Even if your not into hydraulics you could easily put air ride on it or put it back to stock if you know anyone that knows about suspension. Front & rear disc brakes. All suspension is molded & chromed from steering column, a-arms, etc. Has bucket seats with center console. Has a chrome glove box & dash insert. Almost every nut & bolt has been chromed including hood hinges, trunk hinges, trunk latch, headers, fan shroud...I could go on & on. Matching JL Audio system, eight 6 1/2 JL highs with two JL 10's for subs & matching JL amp. Has convertible body mounts. All bushings on vehicle are red neoprene. There is a dent in the driver door due to a cabinet that came loose inside my enclosed trailer. If I were to rate this car from a 1-10, 10 being the day it was restored it is now a 9. It has been featured in lowrider magazines & lowrider videos as well as mini truck & muscle car ad & magazines. This car is a conversation starter everywhere you go. No matter the age, everyone loves it. Priced to sell quick. Why buy one for $30,000.00 that has not been restored. I have $50,000.00 in it. I have never seen a better deal than this, my # is 614-905-6052. The last pic is the dent in the door. Serious buyers only, can text or email additional pics.