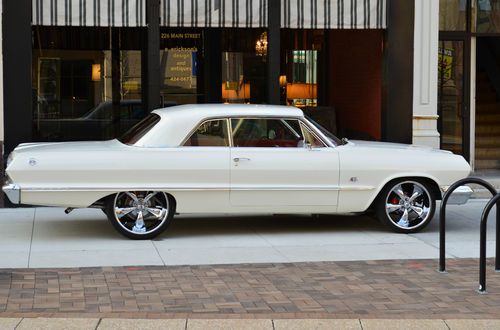 1963 ss impala that once had a 327 but i have converted to a 409 the motor is a 1964 model 425hp QB block, (the car is a true ss)   car is AWESOME to drive or look at, SSBC 4 wheel disc brakes, global west tubular A arms, muncie 4 speed, 2" drop spindeles, 20 " front 22" rear coys wheels, 411 posi,  690 heads port and polished top end is all new put back factory, solid lifter cam, valves, springs, push rods lifters all new, bottom end was already done when i bought the motor, both carbs are new all ignition is new all wiring is new other than dash harness it was in great shape so i reused it, any other ? send me a message thanks JASON southern indiana