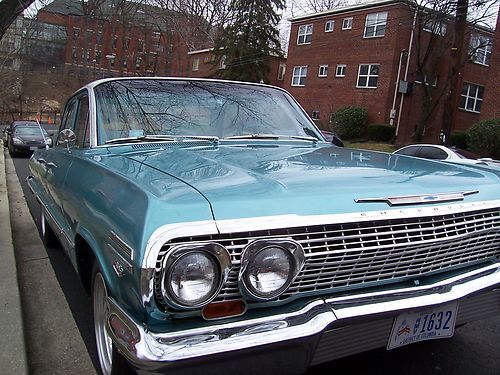 1963 Chevrolet Impala Four Door Sedan.  327 V8, Powerglide Automatic.  Original Interior.  Exterior repainted some years back.  OE Power steering.  Used to have OE air conditioning but it was removed.  Only non-OE items are the four Centerline wheels.  Very good, completely drivable condition.  Has a Cobra alarm installed.  I use it occasionally on my 20 mile commute just for kicks.  Light surface rust in trunk caused by a dried rear window seal.  Also, if vehicle is left uncovered in a hard rain there will be dampness on the passenger floor board.  Overall, car is in great shape considering it's 50 years old. 118k miles is my best guess. I enjoy it.  I'm selling it because A: I have to park it on street and I'm constantly worried about it.  B: I want a four wheel drive pickup.  I can't legitimize having three cars.  Title is clear. Vehicle includes official GM Shop manual for 63 Impala and the best car cover I could buy.  Highly rain resistant yet breathable.