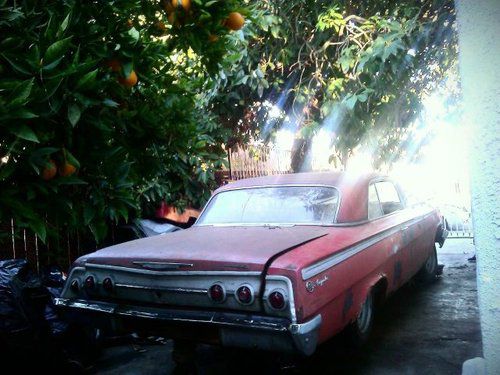 UP FOR BID IS A 1962 ORIGINAL SUPER SPORT IMPALA. GOOD FOR A RESTORE PROJECT
NEED TOTAL RESTORATION. BOUGHT FOR MY SON TO RESTORE, BUT NOW HAS GONE TO COLLEGE.
HAS ORIGINAL 283 BLOCK AND POWER GLIDE TRANS. ONLY THING MISSING IS BUCKET SEATS AND CENTER CONSOLE.BUT COMES WITH FRONT BENCH SEAT. NEED FLOORS AND TRUNK PANS REPAIR. HAS A CLEAR CALIFORNIA TITLE. THIS IS A ROLLER AND IF NEED  VEHICLE SHIPPED BUYER IS RESPONSIBLE FOR ALL SHIPPING COST OR PICK UP .CONTACT REGAL FOR MORE INFO @310 7803237