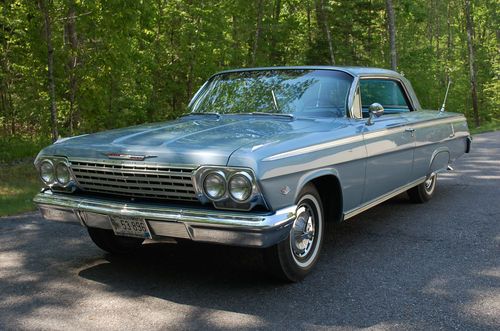 It has fender skirts with the right tires and 62 spinner hubcaps.

It has an Edelbrook carb, valve covers, intake and aircleaner.

The originals are being included with the car (see picture)

The owner decided to have the car repainted professionally 6 months ago, as the original paint was faded.

We have listed this car for the owner.  He stops in everyday and I will advise him of all interest and questions.  I do have more pictures if needed.  The car is kept in doors and can be seen by appointment

It is being sold with the bill of sale and current Maine registration.  Check with your State registration office, but States requiring titles have accepted the current registration as proof of ownership.

Maine does not issue titles on vehicles being registered that are 1994 and older.

Owner will store the car inside for 2 weeks after payment is made.

Please ask all questions prior to bidding.