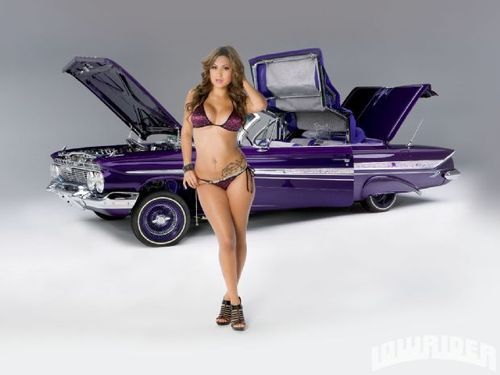 UP FOR SALE IS THE LOWRIDER COVER CAR,SHOWSTOPPER,BEST OF SHOW,TROPHY WINNER U GET THE POINT.THIS IS A 1961 IMPALA CONVERTIBLE LOWRIDER THAT IS CANDY PURPLE WITH PINSTRIPES AND MURALS.THE INTERIOR HAS IT ALL LEATHER AND SUEDE SEATS AND HEADLINER,POWER WINDOWS,POWER VENT.POWER SEATS,CD,DVD,CUSTOM PURPLE DAKOTA DIGITAL DASH,VINTAGE AIR A/C,AND MORE.CAR HAS A CUSTOM BUILT 06 LS2 CORVETTE MOTOR WITH CHROME AND POLISHED ACCESSORIES.ALMOST EVERYTHING ON THE CAR  IS CHROMED OR CANDY PAINTED CAR HAS IT ALL LOWRIDER MAG USES CAR FOR THE ADS AND SO DO CURRIE ENTERPRISES SO THE CAR HAS BEEN SEEN AND IS KNOWN ALL OVER THE WORLD!!! I COULD GO ON ANS ON BUT FOR MOR INFO JUST GOOGLE SEARCH 1961 IMPALA CONVERTIBLE GRAPE VINE AND LOOK AT THE FEATURE THAT LOWRIDER DID OR CALL OR TEXT ME AT 314-951-8333 FOR MORE INFO