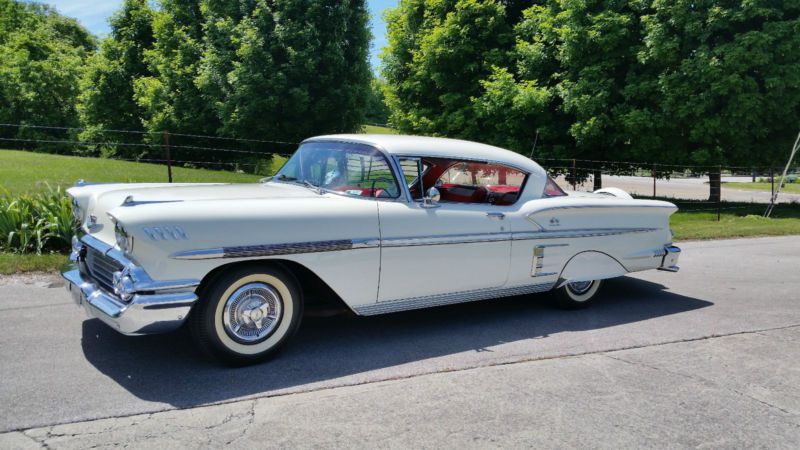 More infos regarding my car at: katicasanas@juno.com .

This is a Vintage,
Excellent Condition
1958 Chevrolet Impala Show Car
Be Ready For any Parades or Shows
You will be The Hit of the Day!
Has been refinished to near factory condition. Rust Free.
This car has received so many trophies for its Appearance and Excellence.
Listed for Father in-law
You are looking at an absolutely Stunning Vintage Show Ready Collector Vehicle.
Vin # F58A145885
Boasts a 348 4 bbl and Dual Chrome Exhaust not only sounds good, but looks Amazing and Purrrs like a Kitten!
She Has been in many car shows in several States and has placed well wherever She is Shown.
This Car is an Icon of Chevrolet's Best cars. It is one of the Backbone's that made the Chevrolet's lines of
excellent Automobile's
She is such a Classic Car with lines that are stunning and true with the all Original appearance and Bright Chrome.
She has a Beautiful Snow Crest White Paint with a Deep Red Interior.
A Gorgeous Continental Kit that's Timeless of that Generation.
The Era of the Big Bold White Wall Tires not only make the car but makes the Snow Crest White Paint look even
better. 6 Incl
Featuring Bold True Dual Chrome Exhaust out the Rear making that not only Beautiful but Exciting
She Has matching Removable Wheel Skirts for that Sleek look On or Off
Interior is just how it should be... Impressive! Red vinyl with tri color inset. Matching Carpeting makes it all
complete with all Hardware and trim to match. Windows and hardware all work accordingly
This car had a frame off in the early 1990's so shes all like new. Garage kept with a soft cover to protect her
This Beauty is a Timeless Classic that can be yours... Good Luck and Enjoy!
Information:
348cc 4 bbl Engine with a Power-glide Transmission and Power Steering
Re-Painted in 2-9-03 in Factory Snow Crest White
Interior Refinished Red (w/Tri-color inlay) This Beauty is Protected By a Very Soft Car Cover (Included)
New Red Carpet was put in when interior was re-upholstered
No Dents, and No Damage.
Continental Kit
Traffic Light View finder. No one seems to know what that thing is on the dash. It makes for a Great Conversation
piece.
This Car Had a Frame Off in the early 1990s.
Bumpers Re-Chromed
6 Very Good Condition Firestone 7.50-14 Deluxe Tires. All mounted
All Belts, Hoses, Hood insulation have all been replaced
Exhaust, Rear End, Brakes, Windows, Clock, Horn, Hinges, Skirts, latches, Continental kit, all work fine with no
issues
No Leaks Except Once in a great while transmission drips a few drops. That's it, as far as we can see or know of.
3rd Owner
Solid Floor, Chassis, and Rear Trunk Pans
To my knowledge this Car has all matching numbers
Extras
New Wind Shield.
Rear Window w/small scratches lower corner.
misc extra parts
Actual Millage? Rebuilt by previous owner from what we were told. Not sure of date or Mileage at rebuild. It had
23576 miles when Dad bought it in Sept 02. The Current mileage is 28101
This car sells for Up to $129,000 in Mint Condition and $69000.00 in low end Good Condition.
So as you can see this Is a Steal for this Price of $54999.99 for this Beauty with lots of Trophy's, Ribbons, and
other titles.
Clean Clear Title