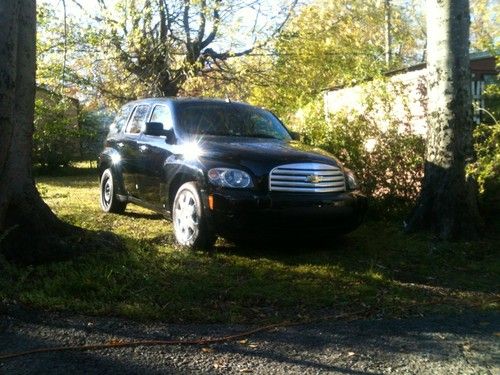 Here it is, folks. Finally, you can buy it. It's the HHR you've all been waiting for! His name is Herman, and he's just dandy. He has just a hair under 85,000 miles, and if you want to know exactly miles he's got on any specific day, just gimme a shout. He's not my daily driver anymore, but I'm gonna keep driving him around. Ya' know, to keep the blood pumping and such. The tires are brand new, just not on the wheels yet. I have them in the back of the car ready to go when someone pulls the trigger. That way, they won't have ever been driven on until YOU drive it home. More pics upon request, but the main one is a shot of young Herman being a noble beast at sunset in the capitol city of the great state of Arkansas. You're gonna love this little guy. Seriously, driving around in this car is like being a puppy and having your tummy scratched until your leg twitches. Only, the one scratching is an ANGEL. He's had all his shots, he's housebroken, and he's very eco-friendly at an average (city driving) of 29mpg. If you don't buy this car, then you don't love AMERICA. It has a 2.2L EcoTec engine that allows it to go SO FAST! Seriously, you could probably drive this thing at like light speed. Or maybe even ONE HUNDRED MILES AN HOUR (which is totally faster than the speed of light if you're in THIS car)! I'm the second owner, and I've put about 60K of his almost 85K on him. He's been a good little buddy, but he does have a few little bumps and bruises around the body, as any used car could expect to have. All in all, a fun little car. Would be a great first car for your kiddos, and he's a good people and stuff hauler, too. Just in case you're a mom or pop.

Payment may be made through Paypal only. LOCAL PICKUP ONLY! I will not be responsible for shipping this car. CONUS bidders only, please.
Also, it is guaranteed that this car will help you meet persons of the opposite gender.**Actual results may vary.