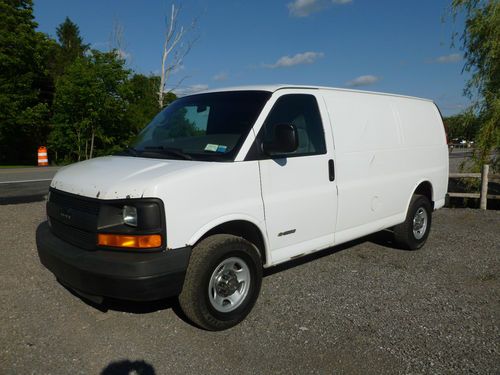 Condition: UsedA vehicle is considered used if it has been registered and issued a title. Used vehicles have had at least one previous owner. The condition of the exterior, interior and engine can vary depending on the vehicle's history. See the seller's listing for full details and description of any imperfections.Seller Notes:"3500 1 ton cargo van. 6.0 liter v-8, automatic,135 in. wheel base,good tires (50-60%tread) 4 wheel disc brakes are in excellent condition. Has class 1 hitch and inertia brake. Very good mechanically considering mileage.This truck was used over the road as a service vehicle for power generation repair. 90% of mileage is highway use. Does not burn or leak any oil. Has some minor dings,dents and scratches.Side panel lower door hinges need repair and w/shield is cracked.Can be put to work right away."

You are bidding on a 2005 Chevy Express 3500 series cargo van. This van was used exclusively as a fleet vehicle and accumulated most of its mileage on the highways. Runs great ,does not leak or burn oil, transmission shifts perfectly. Drive train is mechanically sound. Needs some cosmetic work as you would expect for the amount of mileage on it. Please look at the pictures closely for details on the body.----------- Buyer is responsible for picking up the vehicle..Van is being auctioned AS-IS--- No Warranty implied.