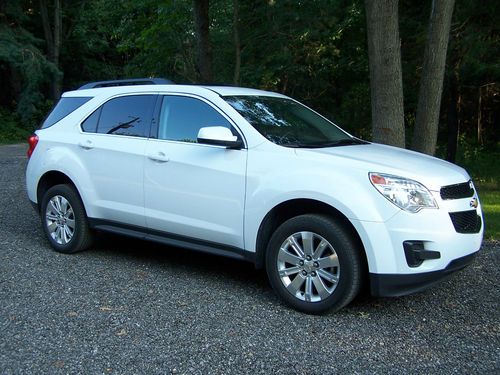 Condition: UsedA vehicle is considered used if it has been registered and issued a title. Used vehicles have had at least one previous owner. The condition of the exterior, interior and engine can vary depending on the vehicle's history. See the seller's listing for full details and description of any imperfections.Seller Notes:"Excellent condition"

RUNS AND DRIVES 2011 Chevrolet Equinox 17285 Miles  salvage flood repaired. I purchased from an Insurance Company with water damage.When I first purchased it, the battery was dead, there were signs of water up to the seat. I have replaced new passenger side fuse box. The car runs and drives excellent ,I have personally driven over 3000 miles with no problems.No sign of water in engine and transmission and was serviced with fresh fluids. Everything works such as power window, power door lock and power seats work, A/C work,cruise,radio, sunroof work, all lights work.Check engine light on, airbag light on, stabiltrak light on,  Since this is a flood car there are some minor things that could be fixed or they do not have to be. You can drive the car as it is. I would not hesitate to drive this car anywhere, fly in, drive home. Exterior is excellent. Interior in great condition. I'm selling the car" AS IS" with no warranty. So please serious bidder only.  I am a licensed and bonded dealer.  Buy with confidence.

Call me if you have any questions 616-780-7655. Looking for nice Kubota 4x4  tractor/loader that I would trade up or down for.
This car is also listed locally.  The seller retains right to end listing early if car sells locally.  Note: There will be a $200 processing fee for the paperwork, taxes and title.
Thank you for looking.