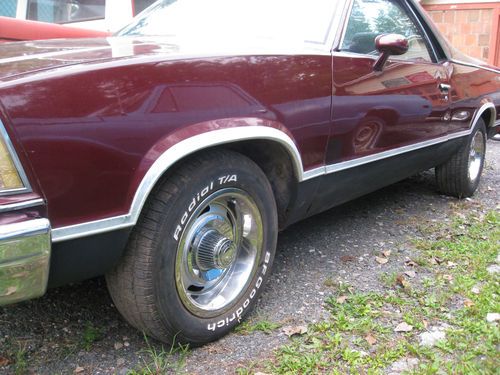 Condition: UsedA vehicle is considered used if it has been registered and issued a title. Used vehicles have had at least one previous owner. The condition of the exterior, interior and engine can vary depending on the vehicle's history. See the seller's listing for full details and description of any imperfections.Seller Notes:"Salvage SOLD AS IS Complete car"

Motor runs  but we are selling as a parts car because of title. If one has the ability to do  work to get it roadworthy it could be fun.
The car got wet in Sandy and it wouldn't open, the locks were removed and the doors open and close may need  catches  or time to get them open and closing easily.
The ignition key is in the car.
All told it should be bought by a person of knowledge or a person with a great spirit towards adventure.
The car  will be SOLD AS IS and has to be moved by Saturday September 14 2013  . I know this is shortly after the auction ends and time may be needed to arrange pick up and however if more time is needed, this is easily remedied by paying for the vehicle on time to avoid incurring storage. Then email, to request more time for pick up.
Provided it is paid for on time, an additional weeks grace is automatic, if more time is needed beyond that it will be arranged  at that time with the new owner. There is no previous storage on the car.

Shipping OK , I will help with all reasonable requests  in this area, buyer responsible for shipping , all costs are the buyers responsibility

0 feedback bidders must email for permission to bid, no email will be subject to cancellation without warning

Notice:Only Bidders will figure in final sale, high bid will have opportunity to buy car if reserve is not met, car will be sold.

Bid if interested.High bidder will have opportunity to own this car.

Notice: Car is SOLD AS IS-Salvage title- If one knows how to get the car roadworthy and get it registered in their state it would likely be a fun project car. It is being sold for parts because of the condition and salvage title.

Good father-son project perhaps or for someone who needs a good starting point for an unlikely but effective sleeper, think BIG block. Good Luck!
Bid to BUY high bidder will own car.