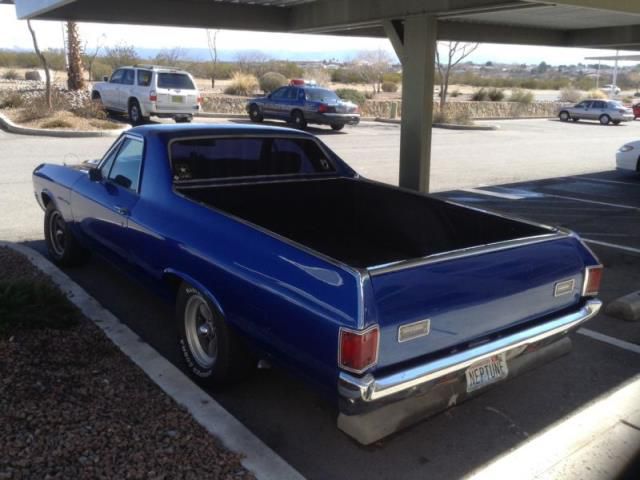 This is a 1970 Chevy El Camino SS*. I am in the military and I am moving to Louisiana in May, so I need to sell this vehicle before then. Here are the features: -Engine : New 5.7L 350ci GM crate motor; it has ~7,800 miles on the motor itself. -Engine compartment: -New 4bbl 600cfm Edelbrock carburetor (Endurashine chrome) with manual choke. -New chrome intake manifold -New chrome valve covers and oil filter -New chrome air filter -New chrome water pump/pulleys/brackets -New chrome power steering pump/pulleys/brackets -New alternator (I have a chrome version as well, but it wasn't generating enough energy. I will throw it in for free if you'd like to rebuild it) -Factory AC (I took the belt off because it was old/worn, haven't replaced it). -Bought a new starter in ~October 2012 -Frame: I bought the car in Las Vegas a few years ago. The car was originally manufactured in California, and the vehicle has been in the desert the past 40 years, so it probably has the best frame of any El Camino on the road, in terms of rust. The vehicle is maintained in an environment free from smoke and rust. -Body: -Paint: Has a relatively new blue paint job. Original paint was dark red with black stripes. The paint has a few chips here and there, and there's a dent in the right side, but overall it still looks good. -Has Torq Thrust rims -Cooper Cobra tires with white lettering -Cowl Induction hood -New Xenon headlights and brights. They are bright, but not blue-colored. -Free, new car cover ($100-$200 value) -Interior (black with chrome lining): -Aftermarket radio: Panasonic stereo/CD player with Bluetooth capabilities. -Aftermarket amp and speaker (both easily removable), located behind the passenger's seat (see pictures). -New headliner and dome light set. The upholstery looks great. -Originally column shifter, but was moved to a floor shift (automatic transmission) -Has a pair of leather Lincoln seats (which I will say are super comfy, and surprisingly not that hot in the summer) instead of the bench. -Truck bed has a nice liner. -I'm currently trying to restore the steering wheel horn button. -The electrical wiring is old, so lights may occasionally go out. -The odometer is off. It currently says 5,185.2 miles. The odometer itself still adds one mile for each mile traveled, but it recently rolled over. It also shows only white on the 10,000s digit, meaning that you will get up to 9,999 before it rolls over again. I do not know the mileage of the vehicle, but I have recorded the engine's emplacement mileage at 7,392, which would mean that the engine's overall mileage is approximately 7,793 miles. *SS status: This section is for those collectors out there who are wondering how the car was originally manufactured. Using just the VIN, I can tell that it is at least a "custom" model and not a "base", and all SSes were customs. It is more likely than not that it was an SS. However, from what I've researched, the only way to actually prove whether an El Camino was originally an SS is to show a build sheet