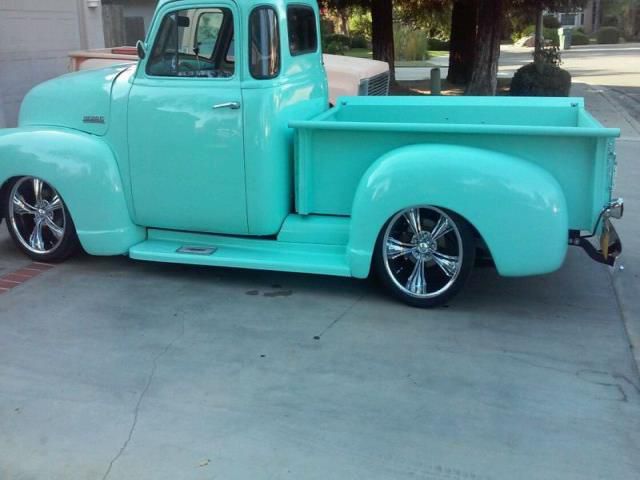 My 1949 Chevy Truck. This truck has had complete frame off resto mod. It has had frame completely took down to metal and painted with a anti rust black gloss paint. Front suspension is off a 1978 Chevy El Camino that has all new bushings, ball joints, tie rod ends replaced with polyurethane. Rear end is off a 1984 Chevy Camero with disc brakes. It has new Belltech drop spindles and coils up front and new Western Chassis drop leaf springs in rear. It has all new brake calipers and brake lines front and back. Also has a new CCP frame mounted power brake unit. It has all new tinted glass, aftermarket chrome bumpers,chrome grill, weather stripping, electric windshield wiper motor, custom interior, new solid oak bed, SS bed strips and bolt kit. This truck has all new electrical and gauges. Has new Vintage Air A/C heater defrost unit installed. Has new 18" Boss 338 staggered wheels with 18X8 in front and 18X9.5 in rear. Truck has a strong running 350 chevy small block and rebuilt 700R4 auto transmission. It has a new 32" Lokar shifter and billet pedals. New steel gas tank is mounted under the bed.New dual exhaust. Inside cab and under body panels have been cover with Por 15 and inside cab and doors have had Dynamat installed. This truck has too much to list.