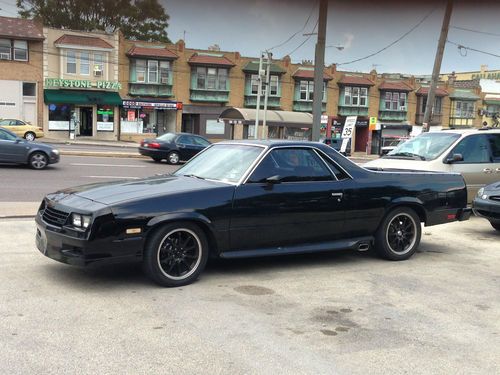 Condition: UsedA vehicle is considered used if it has been registered and issued a title. Used vehicles have had at least one previous owner. The condition of the exterior, interior and engine can vary depending on the vehicle's history. See the seller's listing for full details and description of any imperfections.Seller Notes:"the car over all is in pretty good shape runs very good, the body could use a little attention to be perfect."

Hello eaby shoppers im selling my 84 el camino modified daily driver with lots of bells and whistles. this car is very fast and reliable.( I drive it every day)

Interior: the interior is black and burgundy with a touch screen JVC double din dvd player it also has a back up camera to help u park, it is blue tooth ready so if u have smart phone it will work with that and many other devices. it also has a booming sound system professionally done looks and sounds great all the highs, mids, and lows are really clear. it also has xm radio.
Drive train: Powered by a fresh rebuild 350 4 bolt main  sbc with vortec ported and polished heads, vortec intake ported and poliched to match the heads, mild cam, high volume oil pump, cromoly push rods, scorpio lifters 1.6 lift.   turbo 350 trans with shift kit and 2800 stall converter. the rear is a ten bolt aulburn posi with 410's and its sitting on forged aluminum 18 inch wheels.
Exterior: it looks great with the original body kit and custom exhaust. it has minor scratches and a few dings here and there. Its not the original paint I think it was restored before i got it. There is a little bit of rust starting to develop on the floor but is very repairable
Over all this car is Awesome it gets lots of attention every where i take it.     this car is one of a kind It looks great and makes plenty of Horse power (375hp to be exact)
the car comes with both sets of wheels and #1 pic is how it apears now
call 2674015715 ask for Jesse thanks and God bless!!!!!!!!!!!