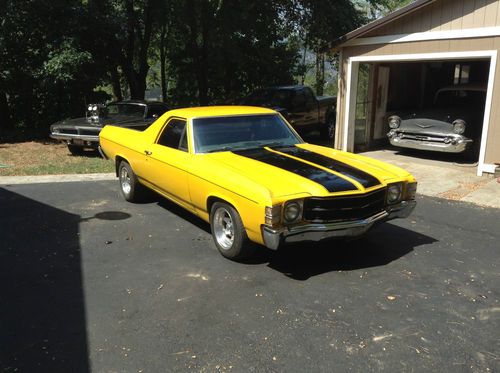 Condition: UsedA vehicle is considered used if it has been registered and issued a title. Used vehicles have had at least one previous owner. The condition of the exterior, interior and engine can vary depending on the vehicle's history. See the seller's listing for full details and description of any imperfections.Seller Notes:"see description"

Up for auction is a 1971 El Camino. This car is in great daily driver condition but is a project as well. Has a 350 with a 600 cfm Edelbrock carb., Has a noisy gear drive timing set, new header and valve cover gaskets, new header spark plugs, new fuel pump. runs great and strong. Has a turbo 350 trans with a B&M floor shifter but I do have the linkage to go back on the column. Dual exhaust with exhaust dumps if you like it loud, one wheel peel reared, car is a tire frier, has new axles and bearings, new brakes. Has rear air shocks but they do bleed down after a couple days, may need new lines. Power steering, manual drum brakes. Car needs a repaint, it appears that this car maybe got a Mayco paint job to sale quickly. I ran a magnet over whole car and it stuck good exept for passenger rear wheel well area, I looked in inspection panel and it looked like an old crease dent, car was mud textured along the rockers like they used to do in the 80's, there are rattle can color match spots along the car. Looks like car was originally mustard yellow then blue and its current yellow now. Paint is a 30 footer, not putting the car down but just want to be transparent on description. Small hole punched in metal from front passenger bumper accident some time in its life. Inner drivers side box quarter in the bed has rusted out areas. Complete floor pans replaced from toe board to back and dyno matted over, ready for carpet. Treasure box has typical rust issues. Car does not have any interior, such as no headliner, door panels, or carpet. Passenger wing window gear is broke, needs heater motor. Wheels and tires are in great shape, Front driver wheel has curb rash shown in video. Again this car runs and drives great, awesome cruiser and comfortable. I think I have covered this car pretty well but please look at photo's and watch the video and feel free to ask any questions on anything I may have overlooked. Great running project for someone, I just have way to many going. Buyer to arrange shipping but I will help with loading and such. Buyer to make a $500 deposit within 48 hours of auction end. Happy bidding!!! I will upload video shortly.