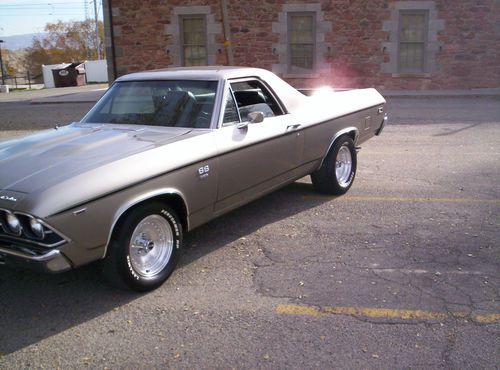 If your a chevelle or elcamino lover you need to see and driver this car , you will take it home with you . This beautiful SS came from florida to utah 5 years ago with new paint and runing good but good wasn't good enough. So I drop it off to a local restoration shop and told them to start at the front bumper and go to the rear bumper and rebuild every thing and they did a great job ,this thing runs and drives like it just came off the showroom floor .But with alot more power and performance.THE ONLY REASON IM SELLING IS BECAUSE OF HEALTH PROBLEMS AND I HAVE MEDICAL AND PERSONAL BILLS TO TAKE CARE OF . I have only put 900 miles on the car since the drive train was rebuilt . I took the car for a ride today for the first time in a year and man every time I take her for a ride I fall in love again ,The engine just keeps getting stonger and stronger ! I bought this car from my high school buddy , some of my best memorys were from riding in this car when we were back in high school. Im the third owner of this car.  Just a few detailes on the drive train= ENGINE  complete rebuild, the original 396/402 ,It sports 10-to-1 speed pro forged durOsheild coated pistons ,heavy duty gm rods ,new rod bolts , THE FORGE STEEL CRANK  10-10 on the bearings ,cast- iron 106.9 cc cylinder heads with manley 2.190 int- 1.880 ex valves new guilds and seats 3/8 pushrods and guild plates and new studs ,comp cams valve  springs, Lunati cam and lifter kit rpm range 1800- 6200 , high volume oil pump elderbrock intake ,holley 850 double pumper , hooker super comp hpc coated headers,GM hei ignition system . It has a new flow master 2.5 in exaust system that sounds great . rebuilt turbo 400 with shift kit and a 2000 stall coverter, GM 12 bolt with new richmond 373 gears and eaton posi carrier,The suspention is fully rebuilt all of the ball joints, bushings, springs, brakes and hoses have been inspected and replace.I have the original rims and center caps with new tires that go with the car or you can have the american racing rims and tires buyer choice on rims. THE INTERIOR is in great shape new carpet the seats have been recoverd has a new head liner the dash pad is good  all the gauges work,speedo,oil pressure,temp,fuel,tac,and it has a clock in center . the drivers door panel shows a little wear at the bottom . all the doors shut tight the weather stripping/seals are good windows roll up and down real nice . I can't think of any thing else to say about it right know . thanks for looking.                ( I had to relist due to none paying bider )