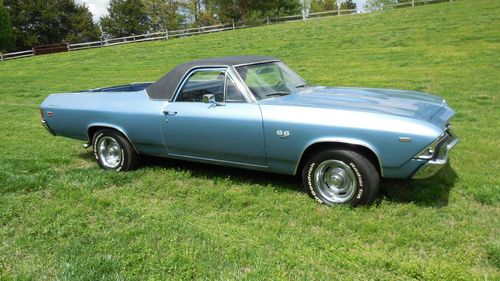 I am listing this for Dad and put my 100% feedback rating on the line for him and this El Camino. In the last 2 years we are trying to reduce the number of toys he has , and I have sold for him a backhoe, Segway, boat, Polaris ranger, Goped, and a few other items. Now the El Camino.  He bought it at a auction and it was represented as a ground up restoration, well that was partly true, but I know he has spent a boatload on all the items he replaced with new to get everything working. A VIN number could not be found on the car by 2 "experts" (not me). So the NC DMV issued him a new VIN, and he has a clear title, not a salvage or rebuilt. We think the car was assembled from 2 cars, but I have no way of knowing. The emblems say its a SS396 but it has a 454 crate motor in it, and it's a rocket and drives great, everything works including the A/C.  Here is what I do know:

and much, much, more.  This car is easily a daily driver and is stored inside all the time. If you want to inspect the car before bidding, just message me and I will give you my Dad's phone number and you can set up a time to see it.  If you have questions, you will need to contact him as I am not with the car he is.
The car is in Tryon, NC.
No Reserve!!!  We will not end the auction early, so don't ask!!!