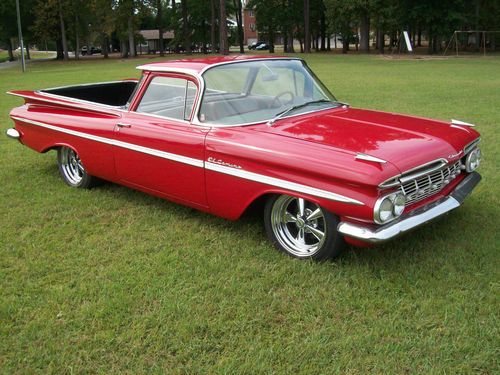 YOU ARE LOOKING AT A 1959 EL CAMINO THAT I HAVE OWNED FOR 20 YEARS. THIS IS A SOUTHERN CAR AND IT IS VERY SOLID. IT HAS A VERY NICE PAINT JOB AND IT TURNS HEADS WHERE EVER I GO. IT HAS A GOOD RUNNING 454 AND 400 TURBO TRANS. IT HAS AN A/C COMPRESSOR AND CONDENSOR BUT I NEVER GOT AROUND TO INSTALLING THE A/C ALL THE WAY. THIS IS A GOOD DRIVER QUALITY CAR AND IT WILL SHOW GOOD AT YOUR LOCAL CRUISE IN BUT IT IS NOT A FULL ON SHOW CAR ALL THOUGH IT LOOKS VERY NICE. THE INTERIOR AND WEATHER SEALS ARE ALL NEW ALSO. IF YOU HAVE ANY QUESTIONS CALL ME AT 423-718-3424, MY NAME IS BILL. PLEASE DO NOT BID IF YOU CAN'T PAY. YOU ARE WELCOME TO COME SEE THE CAR IN PERSON BEFORE YOU BID. IS IS LOCATED IN DAYTON ,TN WHICH IS 30 MILES NORTH OF CHATTANOOGA. THANKS FOR LOOKING.