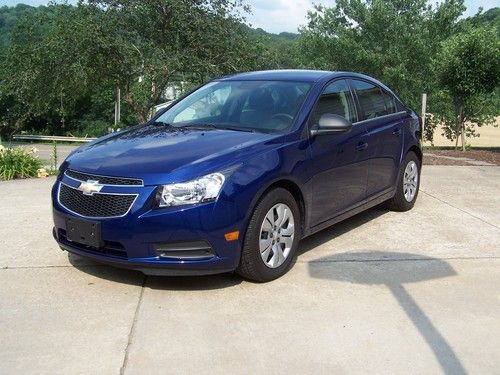 This listing is for a 2012 Chevrolet Cruze LS sedan with a 6 speed manual transmission. The car has an Ohio rebuilt title. This means it was damaged and repaired then inspected by the Ohio State Highway Patrol. The car can now be titled, insured and registered in any state just like any other vehicle. The car was damaged in the rear. The parts that were replaced include the rear bumper, trunk lid and right and left rear quarter panels. The damage was above the frame and it also had no suspension damage. The parts that were used to replace the damaged ones were the same color as the car so the only paint work was on the  quarter panels. The paint matches great as you can see in the pictures. The rear bumper has the back up sensors in the cover but they were not an option on this car so they do NOT work. Also the emblem on the trunk lid says LT but this car is titled as an LS. If the winning bidder does not want the emblem I can take it off before you pick up the car, its your choice. The work on this car was professionally done by me in my shop so I stand behind the quality. there is a small door ding in the right rear door and some small scratches underneath the front bumper cover probably from a parking curb. They are very minor but they are there and I don't want you to have any surprises when you pick it up. I have 100 percent feedback that I have worked hard for and intend to keep that way. It has had a four wheel alignment and runs down the road great. Everything works as it should and the car runs and drives great. Overall this is a very nice car that I'm sure the winning bidder will be very happy with and also be able to save thousands on compared to a new car or one on the lot. If you would like to come and inspect the car or drive it before bidding you can reach me @ (330) 432-3798. If you don't have the funds available to pay for the car before the auction ends please don't bid. I use these cars for fill in work in my shop and depend on the sales for income. There are no hidden fees or games with this auction. What you bid is what you pay. I have a free and clear Ohio title in hand and ready to transfer at the time of payment. Thanks for looking and good luck.