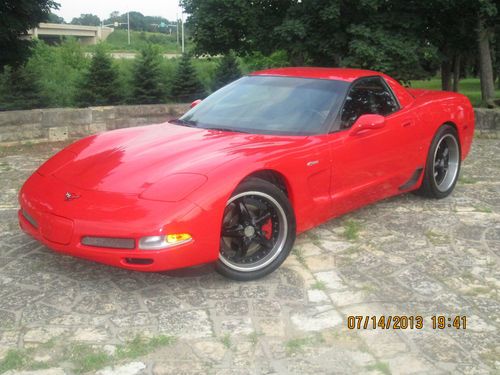 Condition: UsedA vehicle is considered used if it has been registered and issued a title. Used vehicles have had at least one previous owner. The condition of the exterior, interior and engine can vary depending on the vehicle's history. See the seller's listing for full details and description of any imperfections.Seller Notes:"Excellent Condition, Not mint as the seats have slight wear, no rips or fading, but used. No rust at all as you would expect. Garage kept it's whole life.After doing the headers I had to rebalance the A/C and get new Premium o2 Sensors. Just spent approximately $1000 plus $1037.92 for the Kooks 1 7/8 Headers.It has 1 Rock chip on the front left bumper and 3 rock chips on the right rear quarter panel inside the wheel well. No sun fading. This is a "showcar" as I am taking it to CarCraft this weekend.I can provide more pictures upon request, I took 64 pictures of all the seems and alignments to show how perfect the car is. Ebay only allows 24 pictures."

61,800 Driving it as I please in the meantime, car shows and such.
Red w/ Black Interior
Brand "Ruff" Rims 19's Front 20's on Rear
Kooks 1 7/8 Long tube Headers $1037.92 Recently installed
Had to re-pressurize A/C because of the Headers and buy a few new parts for it approximately $350 in Parts.
Bought Premium o2 Sensors for all four sensors
Heads Up Display (HUD)
T56 Transmission (6 Speed)
Pushing 430 hp
Gun Metal Exhaust Tips
Nitto Tires with about 70% tread on them, put on last fall.
This is a turn key car, no issues at all and is in excellent condition.
I am taking it to Minneapolis' CarCraft this weekend. This is a "show car".
Can show the car locally.
Any questions or concerns email me through my ad or call me at  6 1 2 8 0 3 2 9 3 4.
I will require a $500 deposit via Paypal within 3 business days and Cashier's Check for the remaing balance within 7 business days. Buyer is responsible for shipping.
This vehicle is being sold "As Is". If you wish to inspect it you can either use a company, a dealership, or even one of the auctions and I would be happy to take it to your liking as well as aid in transportation.