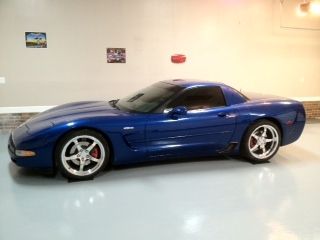 HERE'S A 2003 CORVETTE Z06 WITH 56200 MILES.GARAGE KEPT AND COVERED NEVER BEEN IN RAIN OR SNOW.NEVER WRECKED OR PAINTED.THE CAR HAS HID HEADLIGHTS,B&B EXHAUST,MGW SHIFTER AND CHROME Z06 WHEELS.I WOULD RATE THIS CAR A 9 INSIDE AND OUT.I HAVE THE CAR LISTED LOCALY. RELISTING DUE TO BUYER WAS A FAKE ACCOUNT.