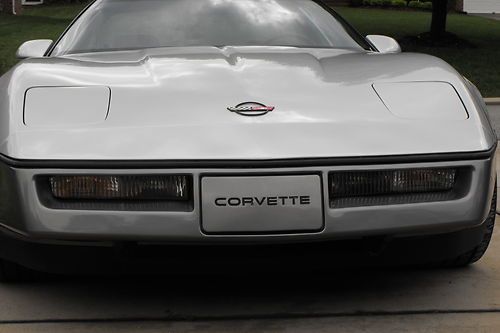 This Corvette has always been in North Carolina. It only has 12,984 original miles, I bought it with 11,400 miles about 3 years ago. It's very clean inside and out, and underneath. No accidents, no repaints. Original paint looks great. There are a few minor flaws here and there but it is a 29 year old car. 350 Cubic inch engine with Cross Fire Injection. All parking and side marker lense's are clear and bright. Front air dam is in place and good. Cloth seats are original and as nice as you can find as are the carpets. Everything on the dash works as it should. Headlights open fast. All glass is perfect. It has the Delco Bose sound system also with the demo casstette. Engine compartment is original and clean, nothing touched up, original clean!. From what I can see, nothing has been changed, maybe the mufflers. A previous owner added some kind of sill plates, I think thats the only un-original thing done to the car. I have removed them and the only signs that they were there are two small holes which possibly can be filled and touched up. It runs great, shifts tight and gets great gas mileage on the highway. I've seen 26 mpg while cruising. It's always good to see a car before you bid, email me if you'd like to do so. I have some original documents, including dealers copy of the window sticker and some documents showing past inspections and owners. A $200 deposit is required with in 24 hours via paypal. Car will not be signed over or released until all funds are cleared. I will refund the deposit if you come personally to pick up the car and you decide not to complete the transaction. I'm that sure you'll like it.

I'm sure there are not many 84's around in this condition.

I am not accepting offers less than my openning bid.

The AutoCheck is showing an inaccurate report of a minor accident that was supposed to have occurred in first NY. They are totally incorrect. I've been in touch with them to get this corrected. This car has never left NC. The records of mileage are proof it was never in NY. Now they're saying it's NJ and maybe even before I purchased it. I have and saved the Autocheck from when I bought it and it showed no accident. Goggle them for complaints, I find them to be unrealiable. They have already lied to me when I asked them questions.