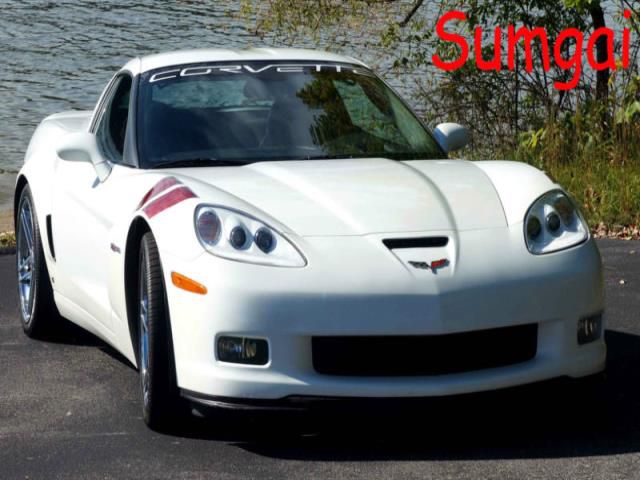 Ron Fellows ALMS GT1 Champion Corvette Z06 Marking his championship tenure with Corvette Racing's GT1-class domination in the ALMS, Corvette racing living legend Ron Fellows is celebrated with a specially prepared 2007 Corvette Z06 production model. All are distinguished by Arctic White paint (including the door handles) that is accented with a racing-style fender stripe and Ron Fellows' autograph. The front fender graphics are reminiscent of the identifying graphics of the Corvette GT1 race car. They feature double Monterey Red Metallic stripes with Machine Silver borders and Fellows' autograph in a contrasting Victory Red shade, along with the callouts of the championship years when he was at the wheel. There is also a maple leaf logo motif incorporated with the graphics, a nod to Fellows' Canadian heritage. Indeed, the red-over-white color scheme of the car's paint and graphics represents Canada's colors. This special Corvette Z06 is the first signed special edition in Corvette's 54-year history, and is the first Arctic White Z06 ever offered. Exterior cues include a full-width racing spoiler and a unique windshield banner. Additional standard equipment includes the well equipped 2LZ package and chrome wheels. Special interior appointments include: Red seats, center console, door panels and instrument panelRed, leather-covered armrest with a Corvette-signature "cross flags" logo that is hand-signed and numbered by Ron FellowsTech pattern interior trim An accomplished road racer, Ron Fellows is inextricably woven into the Corvette Racing team's success. He helped test and develop the first Corvette C5-R race car and recorded the team's first win in 2000. Fellows also grabbed the ALMS GTS class championship in 2002 and shared that position in 2003-04. Fellows has been a part of all six consecutive ALMS GT1 manufacturers championships for Chevrolet, and was voted the most popular ALMS driver in 2004-06. Additionally, he has slipped behind the wheel of NASCAR Nextel Cup Chevy Monte Carlo SS race cars when the series hits road courses. He's also scored a pair of NASCAR Craftsman Truck series wins, three NASCAR Busch Series wins, 19 SCCA Trans Am wins and was the GM Player's Challenge champion in 1989. The "Three Deuces" (#222) has been owned since new by a Corvette collector. As one of three owned, it was never tracked or operated above legal highway speeds. Garage kept and covered, the 2366 miles driven include 982 easy interstate miles to move it from Florida to Virginia