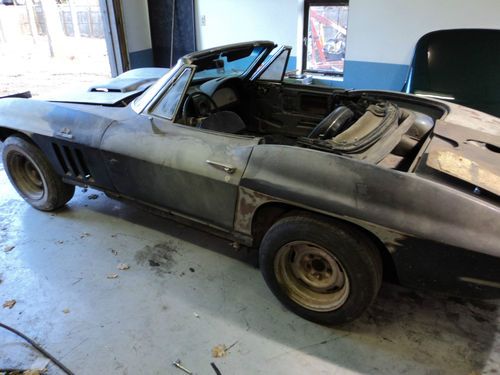 Rescued 66 conv barn find . orig 427/425 hp car no motor or trans .
Car sat in a barn for over 25 years all the while folks were picking the parts off it , engine and trans were sold for scrap !!! body is mostly there but did suffer damage to lh parking lamp panel and surround , poorly repaired doors back look pretty ok . Frame is NICE hardly any rust as well as the bird cage . Still has rear sway bar and tank has never been down although I cant see the tank sticker . Has the 6500 rpm redline tach and the 427 badges still on the fenders . Interior is still intact as well as soft top frame . I found part of orig lh skirt and it has the mounting holes for the TI ign box . The differential has been changed at some point as it has the light duty stub axles. over all a very good candidate for a complete rebuild . Please call 845 567 0500 for additional questions because I am sure I left things out . car will be sold with a bill of sale as the title was lost a long time ago .

Silly me I was not aware that 66 did not have tank stickers . I know enough of the tell tale signs for hp engine options but did not know of that little tidbit Please dont report me to the NCRS